The Brandywiners Chorale welcomed Darrin Peters as its new director in the fall of 2007. Darrin is a graduate of West Chester University with a BS in Music Education with an Instructional Certification for teaching music in grades K-12 in Delaware, Pennsylvania, Maryland, and New Jersey. 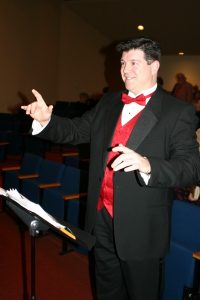 Darrin has taught music and directed choirs for 23 years in the public school systems of Delaware, Maryland, and New Jersey. While at Pennsville Memorial High School and Pennsville Middle School in Pennsville, New Jersey, he served as the Drama Club advisor. During his time there, he built a summer theatre program involving over 100 students from grades 2-12, while raising $95,000.00 for the renovation of the auditorium. He also conducted nine different choirs, taught theatre and dance classes, and served as director/choreographer for the spring and summer musical productions. Every year, under his direction, several of his vocal students were selected for Salem County All-Honors Choir, South Jersey Chorus, NJ All-State Chorus and All-Eastern Chorus, many times in the top 5 seats. Darrin has demonstrated the ability to draw out the passion and talents of singers of all ages. Currently, Darrin teaches K-5 General music and chorus at Cedar Lane Elementary School in the Appoquinimink School District.

Since 1993, Darrin has served as an instructor, director, choreographer, camp counselor, and orchestra conductor for the Young People’s Theatre Workshop (YPTW) in Swarthmore, Pennsylvania. He has directed and choreographed over 25 productions with YPTW including: Annie, Oklahoma, Fiddler on the Roof, State Fair, Thoroughly Modern Millie, Once on This Island, and Hello, Dolly!

Darrin is not a newcomer to The Brandywiners, Ltd. as he has participated in summer shows at Longwood Gardens. He served as Music Director for The Music Man in 2018, Assistant Music Director for Evita, and also performed leading roles in Me and My Girl, State Fair, and Annie as well as ensemble in many other productions. He has sung with the Chorale for several years and served as its assistant director. He is proud to be the director of this fine group of singers.  PLEASE NOTE:  Darrin will be on sabbatical until Fall 2022. For the upcoming Spring 2022 Chorale season, Katie Soukup will serve as Associate Director and Clint Williams will accompany the Chorale.

She recently retired after 30 years of teaching high school choir, piano, and music theory, first at Mt. Pleasant HS (DE) and most recently at Kennett HS (PA), where she also directed many wonderful students in the plays and musicals.

Her collaboration with the Brandywiners began as a child, seeing the shows at Longwood with her parents. Since 1987 she has served the group for 21 shows in many roles: as accompanist and assistant music director, pianist or trumpeter in the pit, contracting the orchestra, and music director for South Pacific and Annie.

She has also enjoyed doing shows at Wilmington Drama League and many area schools. She feels that the Wilmington theatre community is a generous, talented, intertwined family whose friendships are a lifelong blessing.

Her experiences as a singer have taken her to Carnegie Hall with the Robert Shaw Festival Singers, and to England for the King’s Singers Summer School to perform in King’s College, Cambridge and Windsor Castle.

Katie holds BS and MM degrees in Music Education from West Chester University. She lives in North Wilmington with her Mom, Lu Soukup, a life member Brandywiner, and their cat Sophie.

Clint Williams currently serves as Chair of the Performing Arts Department at Sanford School in Hockessin, Delaware, where he conducts three choirs, teaches acting, guitar, and produces the plays and musicals. Past-President of the Delaware Music Educators Association and the Delaware American Choral Director’s Association, Clint is a graduate of the University of Central Oklahoma, where he received his bachelor’s and master’s degrees in music. He also pursued post-graduate studies in opera performance at Temple University. 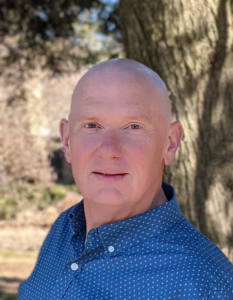 Clint is currently the All-State Coordinator for DMEA, where he oversees all All-State auditions and concerts. Before teaching at Sanford, Clint spent a decade performing as a professional singer in many operas and oratorios. Among his honors as a singer are second place in the Metropolitan Opera National Council Auditions and being named a ﬁnalist in the Orpheus National Vocal Competition. An accomplished pianist and vocal coach, Clint also enjoys music directing, accompanying, and conducting musicals at Sanford School, with Delaware All-State Theatre, Broadway Experience Student Theatre, Candlelight Theatre, and, most importantly, The Brandywiners. Musical performances include conducting the world premiere of the ballet Irene with First State Ballet at The Grand Opera House in Wilmington, Delaware, and appearing as the countertenor soloist in Carl Orff’s Carmina Burana with the Delaware Symphony Orchestra, also at The Grand. Clint also plays French horn and sat ﬁrst chair in Oklahoma All-State Band his junior and senior years of high school before continuing his playing at the collegiate level. Clint resides in Hockessin, Delaware, with his wife, Noël, and their son, Elliott. Clint is excited to work with the organization in this new role as accompanist alongside his good friend Katie Soukup!

The Chorale offers a broad range of Broadway, contemporary, folk, and seasonal music with a new program each season. Our concerts always include a medley of songs from the Broadway show to be performed at Longwood Gardens in the upcoming summer. It’s an introduction that whets the appetite of the audience to attend the summer show. We often liven up some songs with dance and/or added accompaniment on keyboard, bells, bongos, drums, and other instruments played by members of the chorale.

Our repertoire and performances appeal to all audiences and we frequently receive standing ovations. Concerts generally last an hour and can be tailored to the group’s needs.

The Chorale’s concerts are a favorite among many retirement communities and churches in the area. We have entertained at holiday and retirement parties at the Wilmington Country Club, the DuPont Country Club, the Newark Country Club, Delaware Art Museum, Hagley Soda House, Winterthur Museum and Garden,  and the Chase Center on the Riverfront. The Chorale joined the Delaware Symphony for a pops concert at the Grand Opera House and has sung at the City of Wilmington’s First Night Celebrations. We have also performed at Longwood Gardens at Christmas and the Smyrna Opera House.

The Brandywiners Chorale provides a spirit of joyful song to diverse audiences. We welcome the opportunity to share this spirit by participating in your next function. Our only requirements are that you have sufficient space to accommodate a chorus of more than 60 voices and that you have a recently tuned piano.

If your venue is not large enough to accommodate our group, we do also have a smaller group of 20 – 25 singers, called the NoteAbles. We can perform a program similar to that of the larger group, while tailoring it to a more intimate setting.

While we are a non-profit organization, we charge a fee to cover our expenses.

If you love to sing and can read music, come audition with us. We welcome new members. To learn more about what’s expected as a Chorale member, download our “Chorale Information Sheet.”

HOW TO REACH US

If you have interest in learning more about the Chorale or are interested in auditioning with us, please contact our Director, Darrin Peters. He can be reached at (302) 897-5751 or e-mail brandywinerschorale@gmail.com.